Phew! That was hard work! We've been having a terrible time trying to find someone to care for Ada while I'm at work . I'm going back to work on October 29th and procrastinated finding a sitter to the point where it was keeping me up at night. I've talked with dozens of people, met several in person... and we've finally found the one. After two unsolicited recommendations, I finally called Risoris, who works for another family in the building (they're moving away). We liked her when we talked with her and decided to invite her to spend a day with us. After spending 5 hours with her, we're all in love. She'll be starting to take care of Ada towards the end of next week.

Thanks to Risoris, Ada has eaten more in the past 5 hours than she did in the previous 24. She's taken some real deep naps and when she was awake, gazed adoringly at Risoris. She just left -- and this is what Ada looks like now: 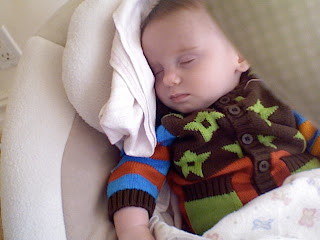 (on a sidenote: check out the awesome sweater romper thing she's wearing, courtesy of my Dad and Jean. Thanks, guys!)
Posted by h at 12:51 PM