Look at this great pic Dain took when he was here this week! Ada has been smiling like this about 80% of the time and yet somehow I never manage to capture it on camera. I guess the iPhone has magical smile-capturing technology as well as all the other cool features. Who knew? 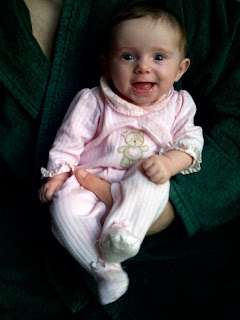 Ada has started using consonants! Her babbling has increased dramatically, and includes such famous consonants as M, G and, in a cameo role, D. Yesterday she distinctly said, "Hi Mama!" It sounded exactly like a very drunk or very sleepy grownup would say it so it was a little garbled, but clear, none-the-less. Of course, at this point she could be reciting Shakespeare and it wouldn't count as talking since she doesn't actually know what she's saying. Or does she? I guess I should do some reading on this -- are babies actually trying to say specific things with their babbling or are they just exercising their mouths? Any child development experts out there who want to weigh in?

Some things else that tells me that she's not really expecting responses to her babbling: here she's having a deep conversation with her teething ring. 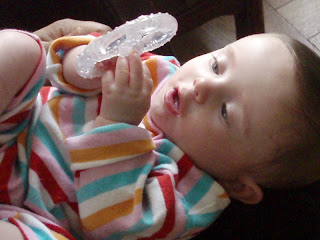 We're starting solid food in earnest. It's a little weird for me -- wait! she's not utterly dependent on me anymore?! - and it's a LOT messier than milk. Heavens, is it messy. 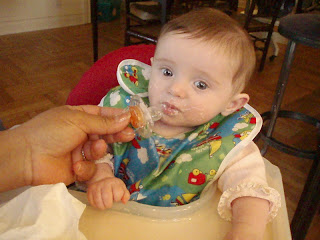 The real problem though, is that Ada doesn't like to eat very much -- milk, cereal, pears, anything. In order to get her to eat, we've been resorting to trickery. Risoris started giving her a spoonful of mushy goo followed by her pacifier. She may not like the goo but she loves her passy (also called bobo) and happily sucks on it, thereby swallowing the food. She ate an entire jar of pears yesterday. Alert the media.

As you can see in the picture below, she's only tolerating this 3rd rate restaurant until she has her own credit card. Then she'll take herself out for something she really likes -- oysters? hot dogs? Uzbek food? macrobiotic? If only we knew! 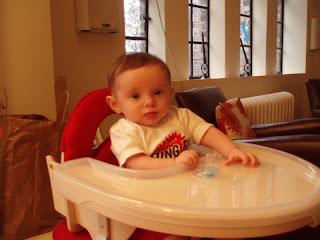 So, we made it back from Colorado mostly unscathed. Ada has a little bit of a cold but since she got it from Thor, chances are the trip didn't have much to do with it. It turns out she's a great traveler -- she slept through all the flights, even the one that was so bumpy I turned green and Thor actually had to use one of those little bags you find in the seat pocket for its intended purpose. Amazing.

It was great to see everyone on the ranch -- Thanksgiving with the western contingent of the family was lovely. Sadly I didn't get any good pictures of Ada and the turkey but we did go for a lovely hike the next day. Here's the girl all bundled up and ready to go: 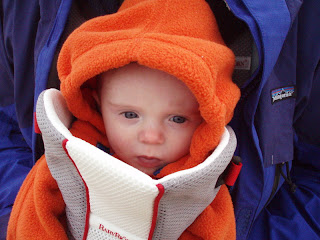 Here we are just setting out -- Ada's getting a lift from her uncle Mic. It snowed a little over night and everything was lightly frosted. 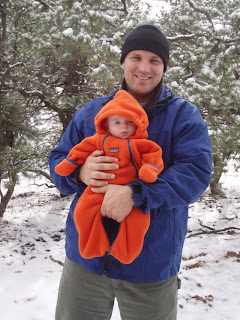 A little overcast, but it was a gorgeous hike: 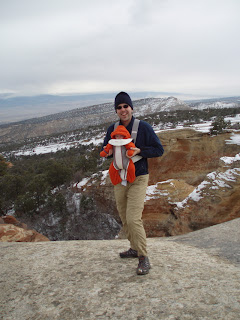 Ada's first experience with snow. She didn't really know what to make of it but she didn't complain much. I promise, we warmed her up very quickly after this photo was taken! 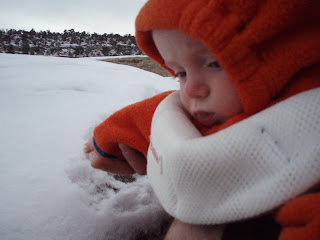 And to prove she wasn't too upset, she fell asleep soon afterwards and slept for the rest of the hike: 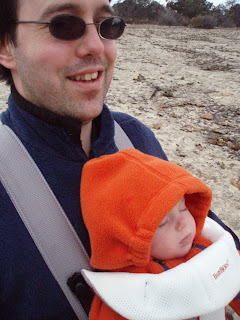 I thought I'd add a couple of photos from the last few days that are particularly funny. As Ada learns more and reacts to things more actively, we're seeing a truly silly range of celebrity impersonations. 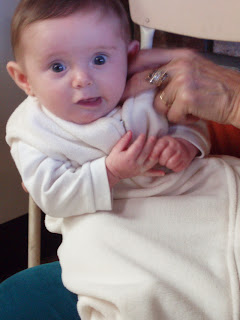 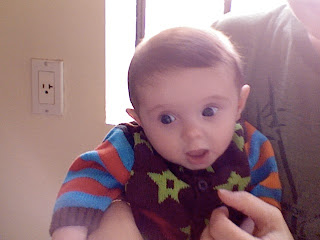 "I'm a very useful baby. I help you pack all the stuff. Don't you think this tiny stuffed dragonfly will come in handy in Colorado? How about my little horse with rattly hooves? I think we especially need my bouncy chair, and my fun swing, and my other bouncy chair, and all my books, and my stuffed cow that goes moo, and my little duck that goes in my jumperoo, and my jumperoo... " 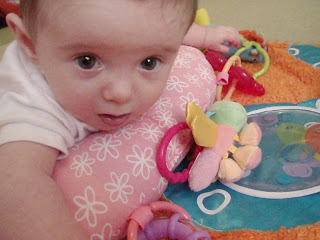 Yes, we're going to Colorado for Thanksgiving. I haven't traveled anywhere in almost a year. Recently, all I've heard about travel are horror stories of people sitting on runways for hours at a time. We don't currently have seats together and I have this nightmare that I'm going to have to put Ada in a seat by herself, next to strangers. "She needs to eat every three hours. Here's her milk; here's her diaper bag; wave to me if you need anything." Do I have anxiety about this trip? Um, yes.

I'm excited to see the family though -- Ada's so much bigger and pinker than she was the last time everyone saw her. She's also louder. A warning to the folks coming to Colorado: Ada recently found her loud voice. She's been shrieking a bit when she's upset, rather than just doing her normal, newborn cry. It's slightly shocking. Luckily she doesn't usually do it in the middle of the night.
Posted by h at 9:14 AM No comments:

...and clearly losing our minds... didn't you know it's important to sing at the top of your lungs ALL THE TIME? 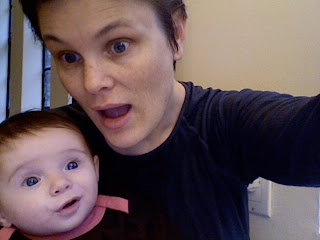 Ada is perhaps slightly less excited to be hanging out with me than I am to be hanging with her. Here she's expressing herself in sign language.... I think she's saying, "chill OUT already, Mom! Gawd." 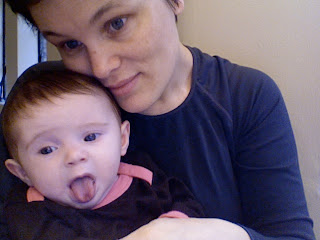 I've already mentioned that I've been back at work for the last few weeks, working every other day. It's worked pretty well because I never have more than one day away from Ada in a row.

Sadly, this week I had to work three days in a row and I have to say I feel bereft. How do people handle this? I guess it gets easier but ugh... Very sad to be away from the little one.

No picture today. By the time I get home from work, Ada' is READY for bed and not at all willing to sit for a picture or two. I'll try to double up on the days I'm home with her, in order to keep the momentum going.
Posted by h at 8:02 AM No comments:

Ada has this little face she makes that I like to call mouse face. She purses her lips and looks around sort of inquisitively, just like a little mouse. Also, just between us, her ears stick out a bit, adding to the mousy effect. We've already established that I'm a total freak about her so I guess I'm past the point of embarrassment -- not only do I have nicknames for her; I also have nicknames for her little expressions. So sue me. 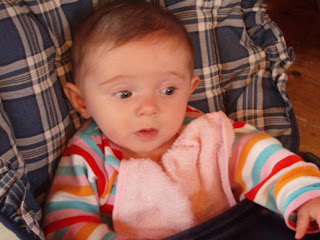 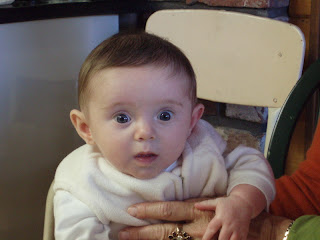 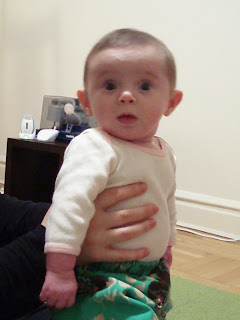 
The tiny one has been talking a lot these days and generally displaying a pretty good sense of the world. Sometimes it's a funny, funny world... 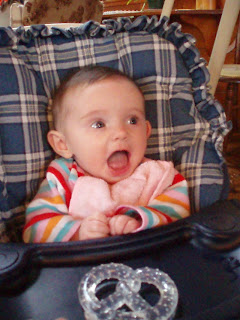 And sometimes, the horror. Only Marlon Brando knows the darkness she sees in the world. 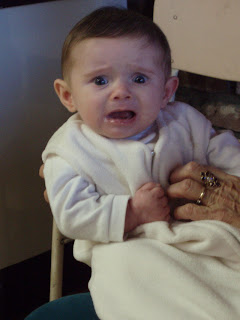 An Informal Organization of Babies

It seems like everyone I know is having kids these days. I'm not sure if it's just that I'm hitting that age or if the world is experiencing an overwhelming outpouring of optimism in the form of reproduction. Maybe it's the influence of the movie "Children of Men."

In any case, one of the funner baby-craze-related incidents was a recent project I was working on (pre-Ada). Over the course of the project, three members of the team had babies. Check out Amy and Harper (9 mo.), me and Ada and Alex and Ella (6 weeks). We're lined up in order of size (of baby). We had a lovely lunch and then strolled around Battery Park City, comparing notes. 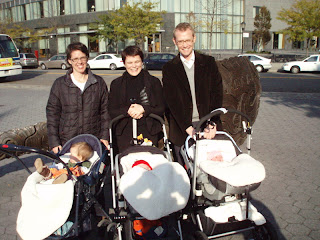 It was my first time around a baby who was smaller than Ada. Although I'm thrilled that she's growing, I got kinda' nostalgic for the days when I could hold her in one hand.

Strangely, she was pretty fussy all day -- I was getting dirty looks from the Very Serious Businessmen in the restaurant -- and I couldn't figure out why until Thor suggested later that she might be teething. I think he's right -- she's been drooling like crazy and has just seemed kind of uncomfortable. Another update: she's had a few bites of solid food! A lovely organic pear compote. Calling it compote makes it a bit easier for me. It turns out I'm a little bit squeamish about mushed up food. Who knew? I'll post a picture of her gorging herself soon. In the meantime, for those of you who need your Ada closeup, here's one from a few days ago: 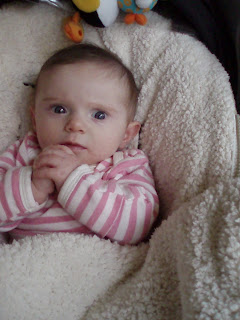 Weird sociological experiment: dress a baby girl in a get-up with a smidgen of blue and count how many people assume she's a boy. You'd be surprised. I always used to say that I didn't want Ada to only dress in silly, frippy, girly things... it's fine sometimes but so much of the stuff that's out there for girls is just over the top. I decided to get her a few new onesies that were mostly tan with a bit of blue on them... and sure enough, everyone we encountered today thought she was a boy. Is it just that people NEED to assign gender based on some innate , primordial mental wiring? Babies do make that hard since they're basically totally androgynous but still... why assume she's a boy ? Of course, I could also wonder why I'm so irritated about it... In any case, she's looking super cute today, even if she does look like a boy! 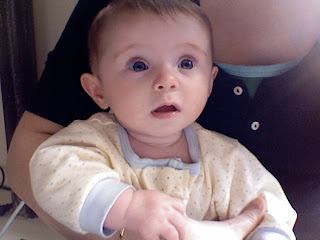 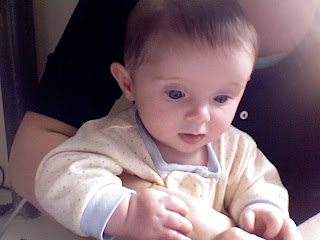 For those of you keeping track, we were at the doc's today -- all is well. She's doing great!
Posted by h at 1:18 PM No comments:

With Ada's new head-holding-up power and her general activeness, I decided to expand her horizons... or at last her positions. All of her "places" -- car seat, bassinet, swing, bouncy chair, etc, etc -- are fairly passive. She mostly reclines majestically. Now that she can sit up a bit more I got her a little bouncy swing thing: 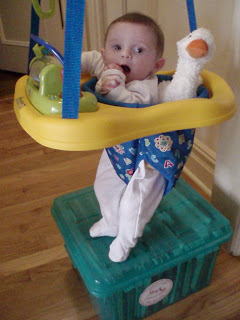 Yes, that's a duck in there with her. She's just barely tall enough but not nearly round enough to fit in it. Her little co-pilot helps keep her from slumping uncomfortably.

So fine, she is a little small for it but we wanted to give her something that let her feel a little more in control. She can move, bounce, stand and play with the little keyboard thingy. It's got lots of annoying sounds but it's cool to see Ada actually realize she can cause something to happen, even if it's a creepy little voice that says, "1-2-3-BOUNCE!" 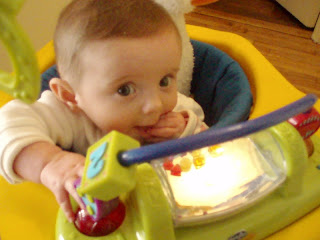 Amazingly she's almost 5 months old. I can hardly believe that much time has passed. She's still very small for her age (in the 5th percentile) but growing steadily none-the-less. For those of you who really want details, she's had a little cold for a while and has been honking with a stuffy nose. Luckily she's just not that fussy about it. Weirdly, the only thing that really makes her fussy is sleepiness...just like me.
Posted by h at 1:26 PM 1 comment:

Big Week For Tiny One

Ada had an exciting week -- her first week with her sitter, Risoris, her first Halloween, her first viewing of Japanese chrysanthemums. All memories I'm sure she'll cherish. This was my first week back at work, although I just went in 3 days. It went pretty well. Ada seemed calm and happy after her days with Risoris, which was great to see.

Risoris does a great job with Ada --- she has a lovely mix of sweetness and competence. 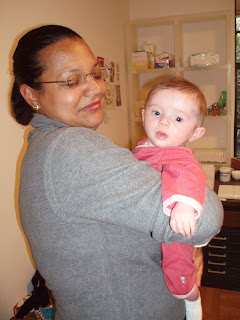 I suspect the only real conflict they have is over tummy time. Ada hates it but she's getting a flat spot on the back of her head so she has to do it. She protests strongly, although below she's just gotten resigned to the fact that no one is going to turn her over. 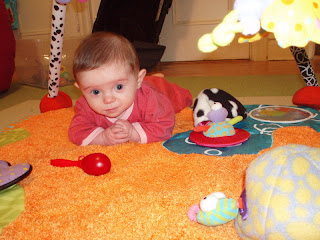