Just thought I'd add a photo of us together today. So many of the current shots are taken by Risoris while I'm at work that I wanted to just record a moment when we were together. Sigh. 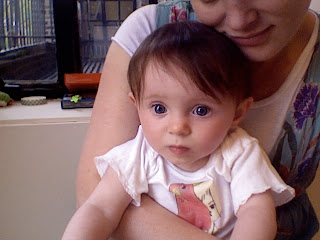 (She's not normally this calm these days -- this was just a lucky shot!)
Posted by h at 5:28 PM No comments:

Ada and Maisie, one of our upstairs neighbors (she's a month younger than Ada), spent the afternoon looking at real estate together, after realizing that living at home is, in the immortal words of the Beastie Boys, "such a drag!" They've decided to join forces and fight for baby power! Of course, first they'll need baby water, maybe some baby furniture ... they might even have to pay baby rent. In the meantime, they'll use flashlights. 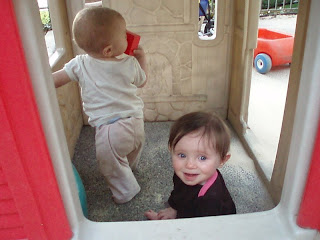 Ada: "It's going to be a little less comfy than we're used to but these are the sacrifices you have to make to protect your right to party."
Posted by h at 5:17 PM No comments: 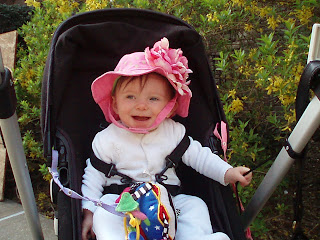 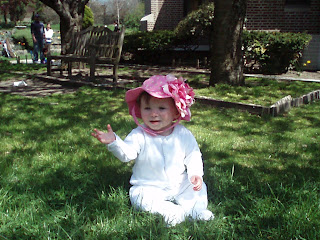 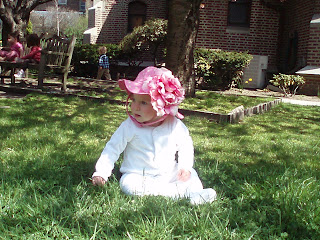 Thanks to Leah for Ada's lovely spring hat -- she's her own easter parade in a tiny little pink and white bundle. Thanks also to Risoris for taking the photos today as she promenaded around with Ada. Finally, thanks to Ada for not tearing the hat off her head immediately.
Posted by h at 5:07 PM 2 comments:

Despite the gorgeous weather, I decided to take Ada downtown on the train yesterday. It's actually more fun for her -- she waves and flirts with all the other passengers; she gets to hang out in her stroller rather than being strapped in to her car seat; there are mysterious loud noises to be investigated -- fun all round. 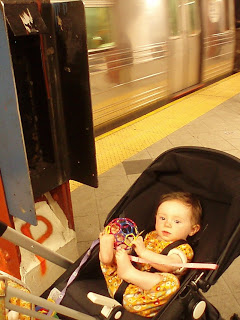 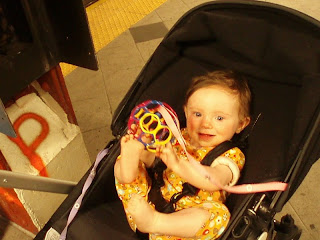 Yes -- she does own socks and shoes. Yesterday she kept tearing them off until I just gave up. Sigh, so undignified!
Posted by h at 8:11 AM No comments:

In the Park with Saira

Yesterday was so utterly gorgeous -- brilliantly sunny, warm, amazing! Even though it's been a fairly mild winter, the first really warm days of the year have just been feeling so magical. I met my friend Amrita and her extremely adorable 4-month-old, Saira, for brunch and a stroll in the park. I'd have to guess that there were at least 1 million people in the park (no, I'm not exaggerating) but we managed to corner a little piece of lawn and hang out in the sun.

Ada got to use her sun hat and I tried to get her sunglasses to stay on, to no avail. Here she's about to start exploring Saira's nostrils and ears. Babies, as it turns out, have a very poor sense of boundaries. 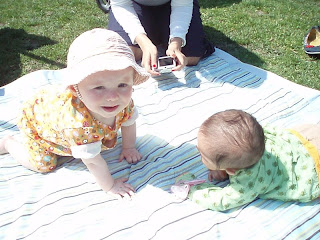 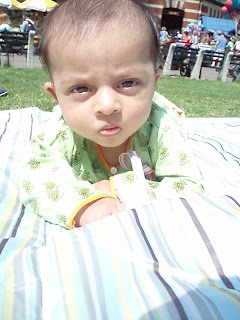 Saira is actually a very smiley baby, but she was born in winter so I think she was asking herself, "what the HELL is this? Can someone please turn off the lights?" So cute!
Posted by h at 7:57 AM No comments:

More hilarity at play time. This is the sandbox in the little playground that's about 10 steps from our door. Now that she's a bit bigger I'm realizing just how fantastic our apartment is for kids. We're so lucky! The playground also has the most beautiful view in the whole neighborhood, looking out over the river and the palisades.

As you'll see in some other pics I'm about to put up, NYC is at its most beautiful right now -- flowering trees, perfect sunny 70 degree weather... everyone is sort of giddy with it. Meanwhile, I'm giddy with the cuteness of the little munchkin, playing in the sand. Of course, that hairclip has just got to go. What do you guys think? Should we ban the hairclip? If you like it, now's your chance to convince me. Otherwise, those clips are getting melted down and turned into, ummm, tiny pellets of melted plastic? 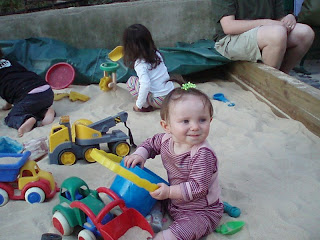 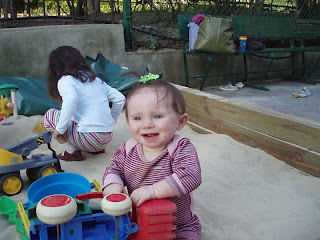 Risoris has been taking pictures of Ada's playtime when she takes her out when I'm at work. She caught a few of Ada causally tooling around town in her tiny, zero-emission vehicle. How very Green, Ada! 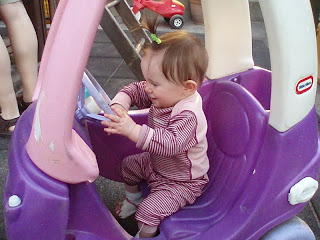 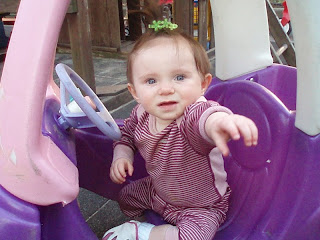 (Actually, considering the amount of plastic in this car, it is very unlikely to be all that green but anyway...)
(PPS, that hair is still just wrong. I'll note that the clip is never in her hair when I get home from work...hmmm...)
Posted by h at 3:21 PM 2 comments:

Daddy and Ada at Sears!

Does the fun EVER stop? For Ada, the answer is no. As long as she can steal Thor's glasses she's thrilled, even in the appliance section at Sears! 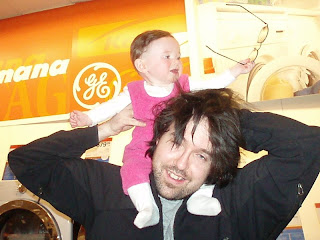 Ada can totally hold her own, even if she isn't the biggest baby on the block. For evidence, check out these photos of a recent brunch at our friends Liza and Ryan's house, with their extremely cute and very mobile baby, Luke: 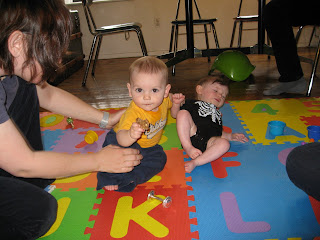 Here Ada was moving just a bit too slow -- Luke has places to GO! Ada was cramping his style so down she goes! I have to say I don't think I've ever seen a baby move as fast as Luke crawling down the hallway. Zoom! 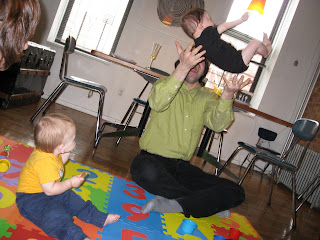 Thor and Ada have a flying technique called, "Throw the Baby Up in the Air" -- it's highly scientific and very much still in the research phases. However, research has shown that under certain conditions, babies can actually levitate. Thor has recently gotten a grant from the navy to test his methods on aircraft carriers. Very hush, hush. 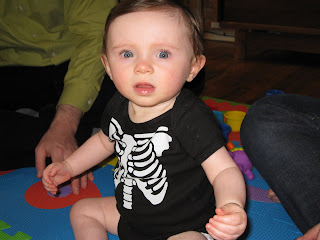 She's small but tough. Also, in case you're wondering, yes, we do dress her like a juvenile delinquent every day. You gotta problem with 'dat?
Posted by h at 5:21 PM 1 comment:

Ada is finally mobile! She's not exactly crawling, as you can see from the video, but she's getting where she wants to go. Actual crawling is just days away. I'm excited but terrified... are we ready for her to just go anywhere she wants? Um, no. Hello, houseful of dangerous things... delicious, irresistible dangerous things that Ada can't escape.

I think we need to rethink our decorating scheme ---perhaps something along the lines of a japanese tea house, but without the tea (nothing hot), the mats (nothing suffocating) and the shoji screens (not dangerous; she'll just tear the hell out of them).

Welcome to Our World

The eating saga continues, with some documentary evidence below: 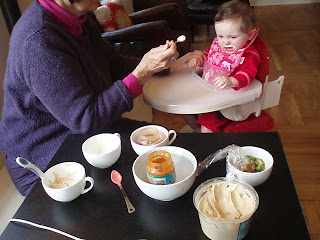 From left to right, we have yogurt, avocado, pears and raspberries, spaghetti, more avocado and hummus. And, considering this smorgasbord, wouldn't you expect the little one to be excited about her food. Sorry, wrong. After I took this picture, we added cream cheese and cheerios to the mix. Happily, she loves cheerios. Sadly, each cheerios has an estimated .3 calories. Since Ada needs 800+ calories a day, I'm not sure she's going to get it all through her cheerios intake.
Posted by h at 2:54 PM No comments:

Do these photos even need captions? 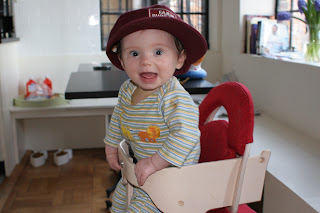 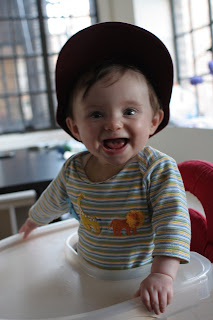 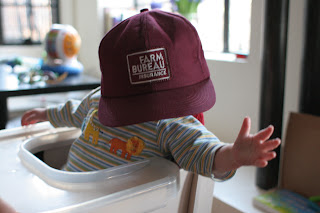 I'm laughing too hard to come up with something funny to say....
Posted by h at 2:49 PM No comments:

Oooooh! Freaky. I have some crazy talentz on da' computer. This is what Ada would look like if she were a siamese twin -- a highly scientific rendering. 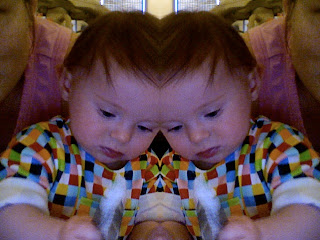 She doesn't look too happy about being manipulated like that but it didn't hurt too much, I promise. :-)
Posted by h at 1:52 PM No comments:

Thor and I like to consider our selves truly HY-sterical -- we dress Ada in this little onesie when she has big dates with the doctor. We figure it doesn't hurt to make medical people smile. They have a long day too, right? Besides, she looks pretty cute. 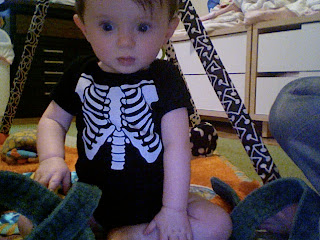 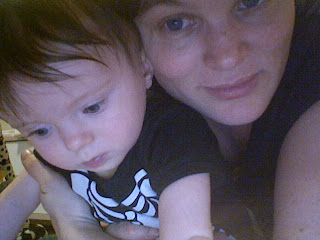 Before I was pregnant with Ada I would walk by these swings in the park across from our house and sigh. All the babies. All the mommies, having fun on the swings. Now that Ada's big enough she goes to the swings most days. It's funny to be there with her, because it makes me think about how much has changed in the last year... almost unimaginable, really. 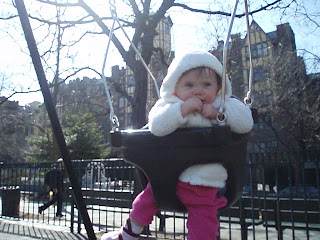 The major excitement of recent weeks is the addition of the exersaucer. I resisted for a long time... I'm enough of a design snob not to want this monstrosity in my house. As I've learned before and have relearned recently, design snobbery and kids just don't mix. So I've surrendered. I don't think Ada looks too put out, do you? 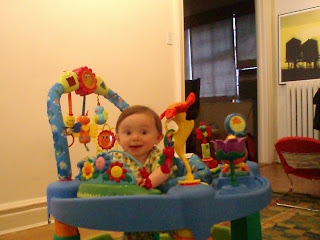 "It's a magical fairy wonderland full joy and happiness! How could you have kept me from this for so, so, so long?" 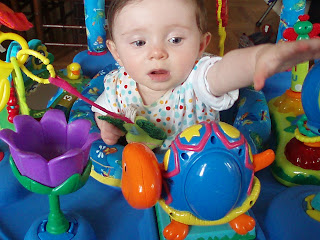 "Turtle? Frog? Turtle? Frog? Frog!" In a stunning, exersaucer-induced feat of brilliance, Ada has proven that she understands more than we thought. You can ask her where her frog is (she's holding it in this picture) and she'll reach for it, and sometimes even hand it to you. Amazing. 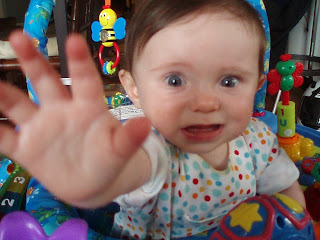 "Man, can't I have a private moment with my frog without you snap, snap, snapping photos? I'm gonna write an expose on the vile tactics of the mom-erazzi!"
Posted by h at 1:25 PM No comments: